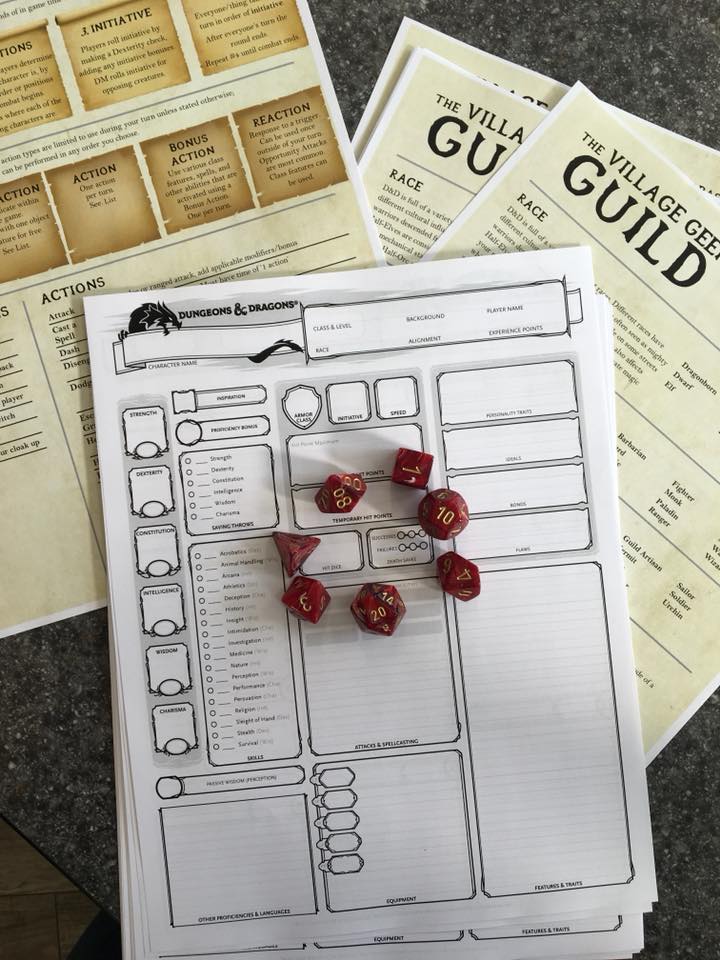 Outside the city of Neverwinter there is a guild of adventurers and heroes known as Dearborn Company. These are their stories…

A team of new recruits traveled south to Scirsdale to clear the surrounding forest of an infestation of twig and vine blights. The blights had consolidated at a deep watering hole near the town due to a drought in the area drying up smaller sources of water the blights had settled around. The team was successful in clearing the blights with minimal injuries. Fireniel’s grandmother, Malene, owns the Roxey Inn located in Scirsdale and is very grateful for the team’s quick and decisive resolution to the situation. 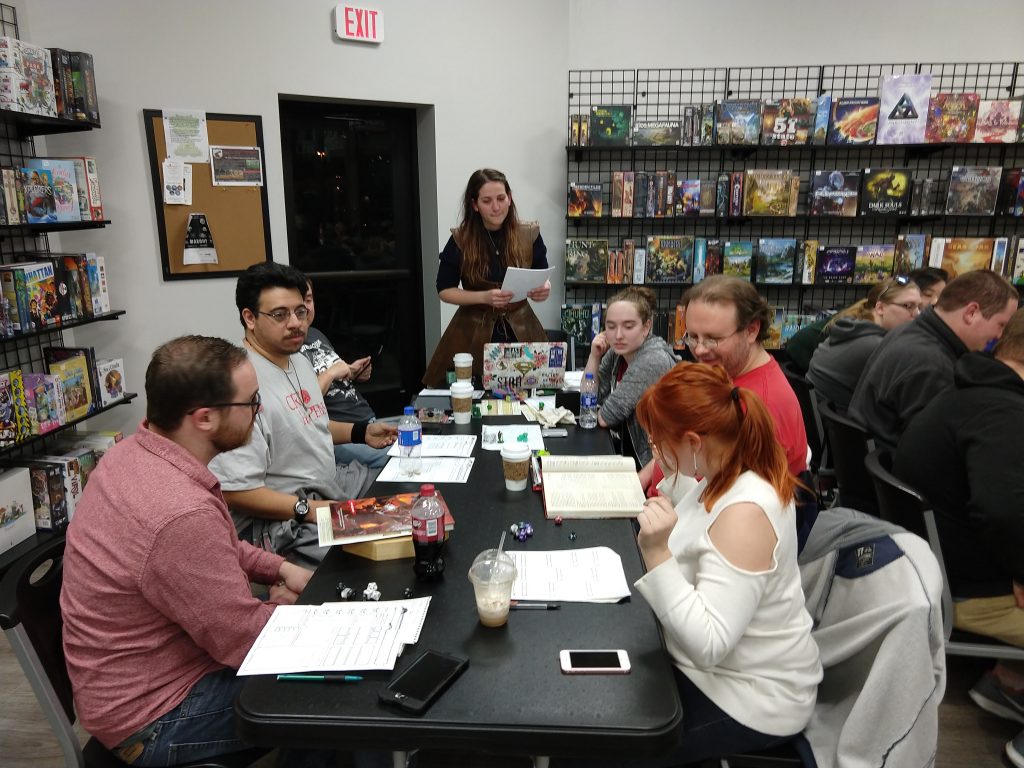 As a favor to company librarian and trial of initiation, a group of new recruits completed the delicate case of retrieving an inheritance belonging to an old woman in the small town of Everleigh (a quaint river community just a day’s journey from headquarters). The inheritance had been left to the woman’s granddaughter who needed the funds to buy her way out of an unfortunate engagement. The recruits were able to easily overcome the challenges they encountered, including some Grung, a narcissistic lush, animated shrubs, aggressive ceramics and unfriendly books. Despite the eccentric security measures put in place by the late grandmother (a poet and botanist), the recruits were able to retrieve enough of the inheritance to ensure the young woman could leave the engagement and return to collect the rest when she was ready. She was grateful to the Dearborn Company members for their assistance. 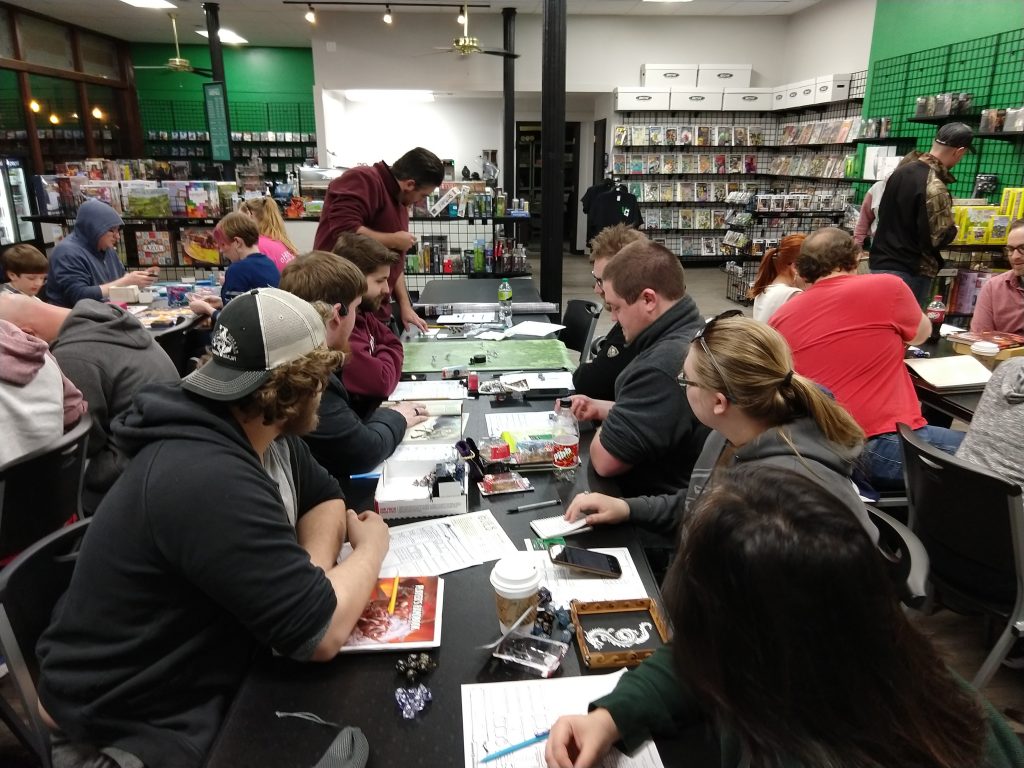 Leftovers in the Library

One lonely night a questless group at Dearborn Company was graced with a visit from Estelle VarEmerys. She insisted the group (who cleverly dubbed themselves as The Leftovers) help find her missing daughter and solve the mystery of a dark magic phenomena disrupting her library. The Leftovers discovered a cursed book enchanted by a rotting plagiarism spell. While investigating, they were sucked into the book to fight the dark magic which manifested as a ghoul empire. The Leftovers finally “finished the story” as they slayed the ghoul king and were shot out of the book. The book now tells the tale of their endeavors.

To join the adventures of the Dearborn Company, come to The Village Geek in Manhattan, KS every other Saturday at 5:30pm. https://www.villagegeekgames.com/manhattan-events/ 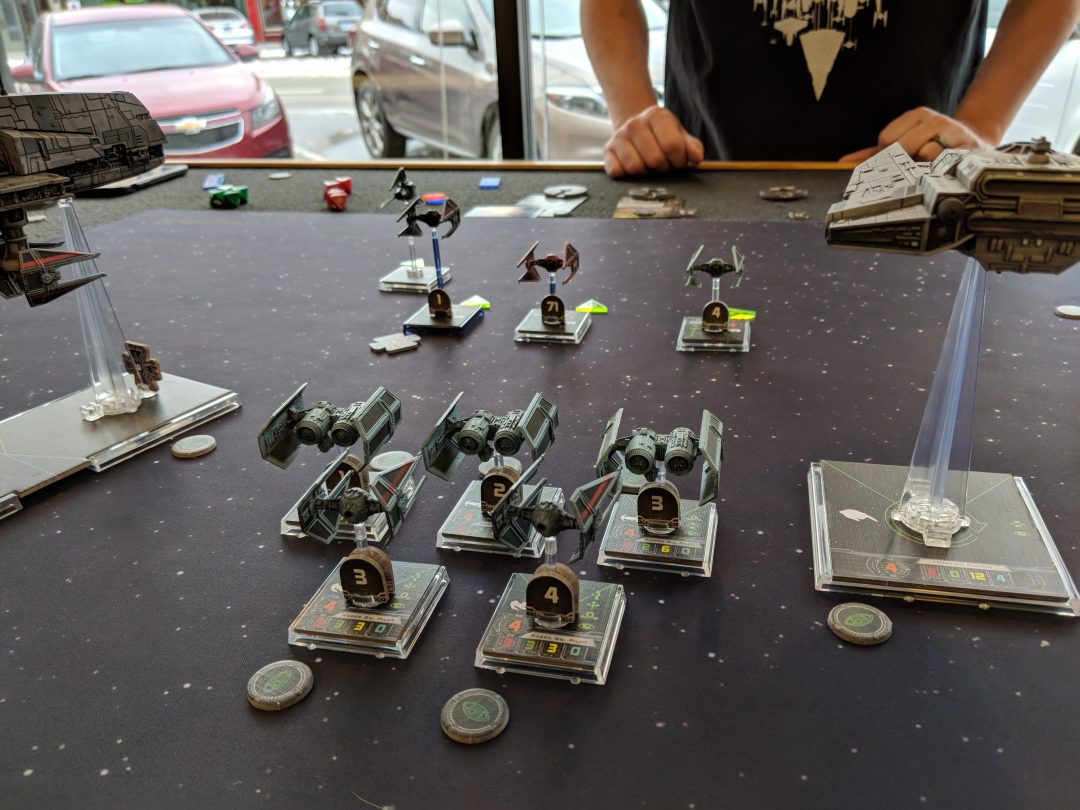 I love epic x-wing games. The balance of slamming the hammer of your jousting ships into the face of your opponent’s fleet while deftly slicing through it with your flanking ships is more pronounced when playing with more than the standard 100 point 2-5 ship squadrons. Also 20+ ships on the table at once looks almost excessively imposing.

Everyone in the community I play in has gravitated towards using Fantasy Flight Games’ Team Epic rules of 400 points per team (normally 200 points per player, 2 players per team) but with only one player per team. When games scale that large, the efficiencies of some ships like original TIE Fighters and B-Wings can overpower others to a point of imbalance. To counteract this, we all include at least one Huge ship in our lists to enjoy the sense of epic space battles while also maintaining a good game balance.

Building to 400 points requires a slightly different focus than a 100 point squad. Ships that rely on dodging firing arcs to stay alive have a harder time doing so when there are 10-15 enemy ships on the board, all hunting for targets to shoot. In a 100 point game, one ship taking an extra action or gaining an extra token can increase your overall action economy 33% (based on 3 ships with 1 standard action each). The same ship in a 400 point game might only impact your action economy by 8% (based on 12 ships with 1 standard action each). 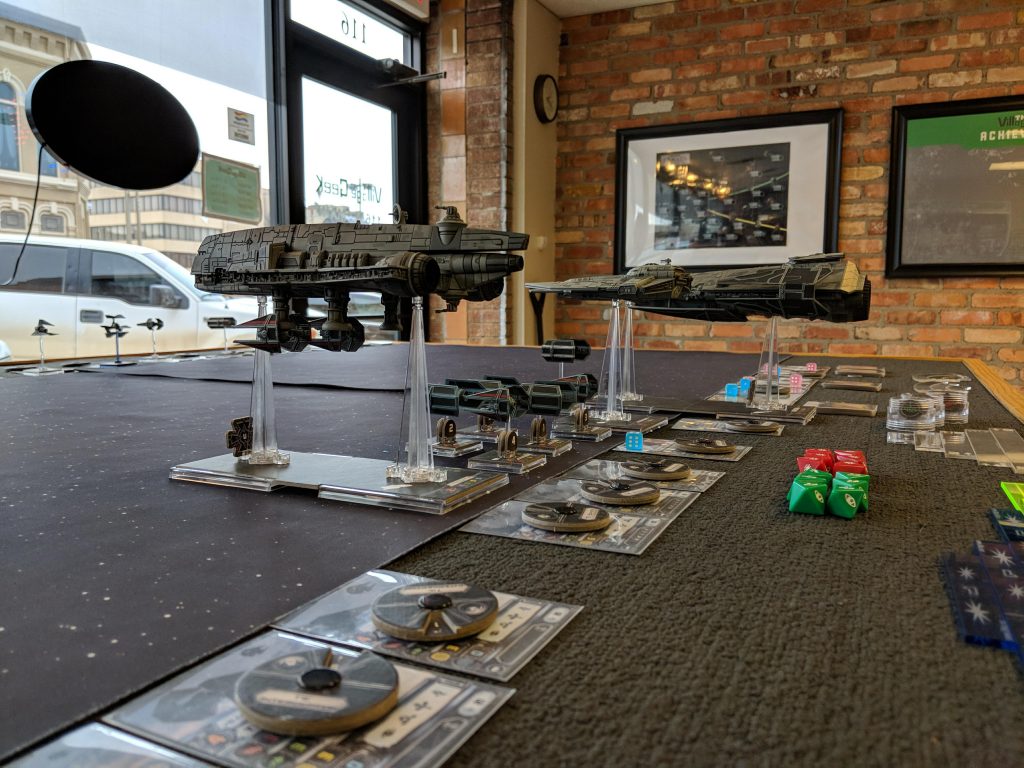 With so many attacks, each individual ship has a higher chance of being taken out before it has a chance to have an impact in the game. High cost pilots like Dengar or Soontir Fel who have abilities that can provide a powerful boon over the course of the game, might end up being negative point sinks if they go down quickly in a hail of focused fire.

Two approaches to building an Epic list are to outfit the Huge ship(s) in the list first and bringing smaller ships to support the Huge ship or maximizing the fleet of small ships and squeezing the Huge ship in with just enough upgrades to support the rest of the fleet. When I started building my current favorite Epic list, I took the first strategy. If I was going to spend 100 plus points on a single ship, I wanted to get the most out of it. Here’s my current favorite Epic list, titled The Black Hand:

With the Raider, I’ve tried to maximize its attack efficiency as much as possible by taking Weapons Engineer and Ordnance Tubes. This allows me to use target locks as resources to supplement the energy used on the Quad Laser Cannons and firing the primary weapon twice per round with a round of Cluster Missiles and Proton Torpedoes. If there are enough targets in range, this buildout will let the Raider shoot five times in one round, rolling a total of 21 attack dice. The rule for Huge ships activating last allows the Weapons Engineer to give me two target locks on the ride targets for that rounds ordnance shots. 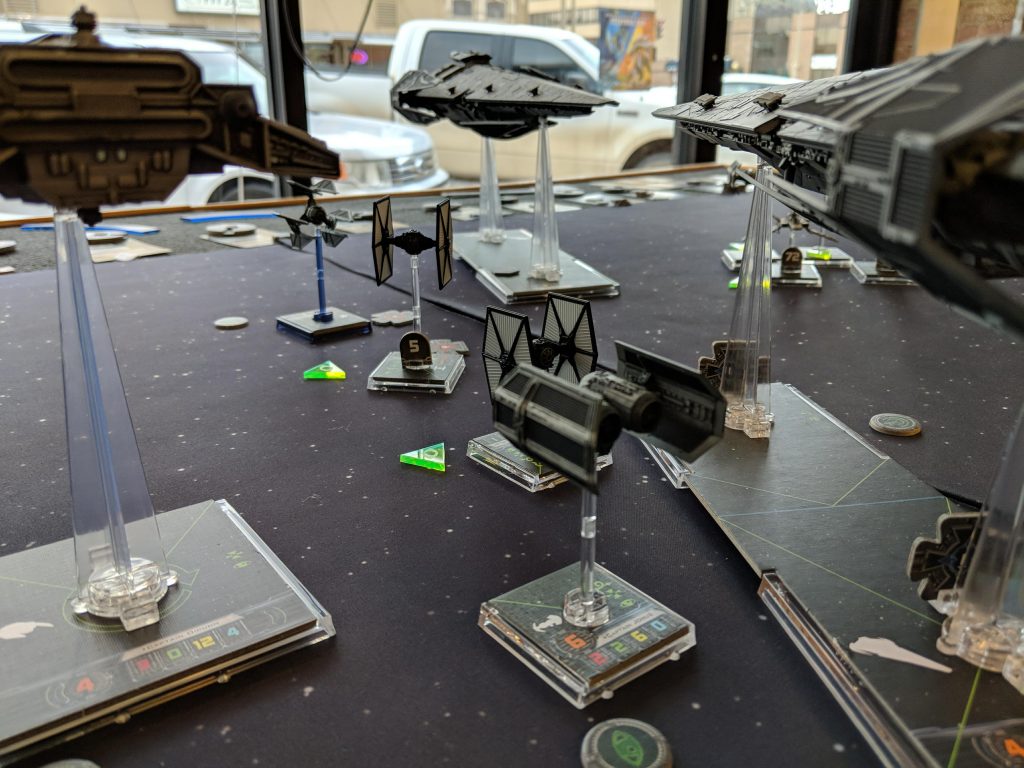 The one slot that has flexed the most on this buildout is the Tactician. I’ve also used the IG-RM Thug Droids Team and a Breach Specialist to increase the critical damage output while also giving the ship the ability to protect itself from incoming critical damage. I prefer the Tactician however because of the amount of stress it can deliver each turn, hampering my opponents’ maneuverability and ability to take actions.

Captain Jonus’ inclusion in this list is as an extension of the Raider. His pilot ability allows the Raider to modify three of its five attacks each round and Draw Their Fire can protect the Raider from critical damage that is typically much more hazardous on Huge ships. The TIE Shuttle title is included for flavor, as Jonus is typically flown close behind the Raider and not often in the fight.

Captain Oicunn is a bull in a china store early in the game: charging into the opponent’s fleet and disrupting the formation while denying actions and causing early damage for other ships in my squad to capitalize on. If he survives into the end game, the 16 hit points and 3 attack dice turret can be hard for the remnants of an opposing fleet to deal with.

The Gozanti’s job is to protect the other ships in the fleet and die first. It will charge in right behind the Decimator and try to run over any opposing ships unfortunate enough to get caught in its path. Once it’s pushed past the initial joust, it will launch the two docked TIE Interceptors so they can flank behind the opponents main forces. Once it’s served that purpose, it usually dies quickly to the focused fire it draws.

A shot of Ben’s Imperial list and hey, he’s flying TIE Interceptors, too!

I love TIE Interceptors, they’re my favorite ship in the game. In this list they bring up the rear of the squad, ready to chase down any ships fleeing the slower/less maneuverable TIE Bombers. Trick Shot lets them offset the defenders bonus when they shoot through the Huge ships on the field.

Soontir Fel starts docked on the Gozanti. The strategy is to launch him from the carrier behind the main fight so he doesn’t die too quickly. If he survives into the late game, his high PS and pilot ability make him a huge threat. He is nine more points than the Saber Squadron Interceptor, but the Pilot Skill advantage and action economy makes it worth it.

My personal favorite pilot. He starts docked on the Gozanti with Soontir Fel. While his pilot ability is not great in a game with so many firing arcs to dodge, I find his high Pilot Skill worth the additional two points as a wingman for Soontir Fel. That, and what’s the point of playing X-Wing if you can’t have fun with your favorite pilots?

I’ve flown this list about a dozen times in the last year and I’ve had a lot of fun with it. I’m happy with how well it performs and have won more than I’ve lost.

I’m currently working on a new Scum & Villainy list with the C-Roc and three Aggressors that I’m excited to try soon!