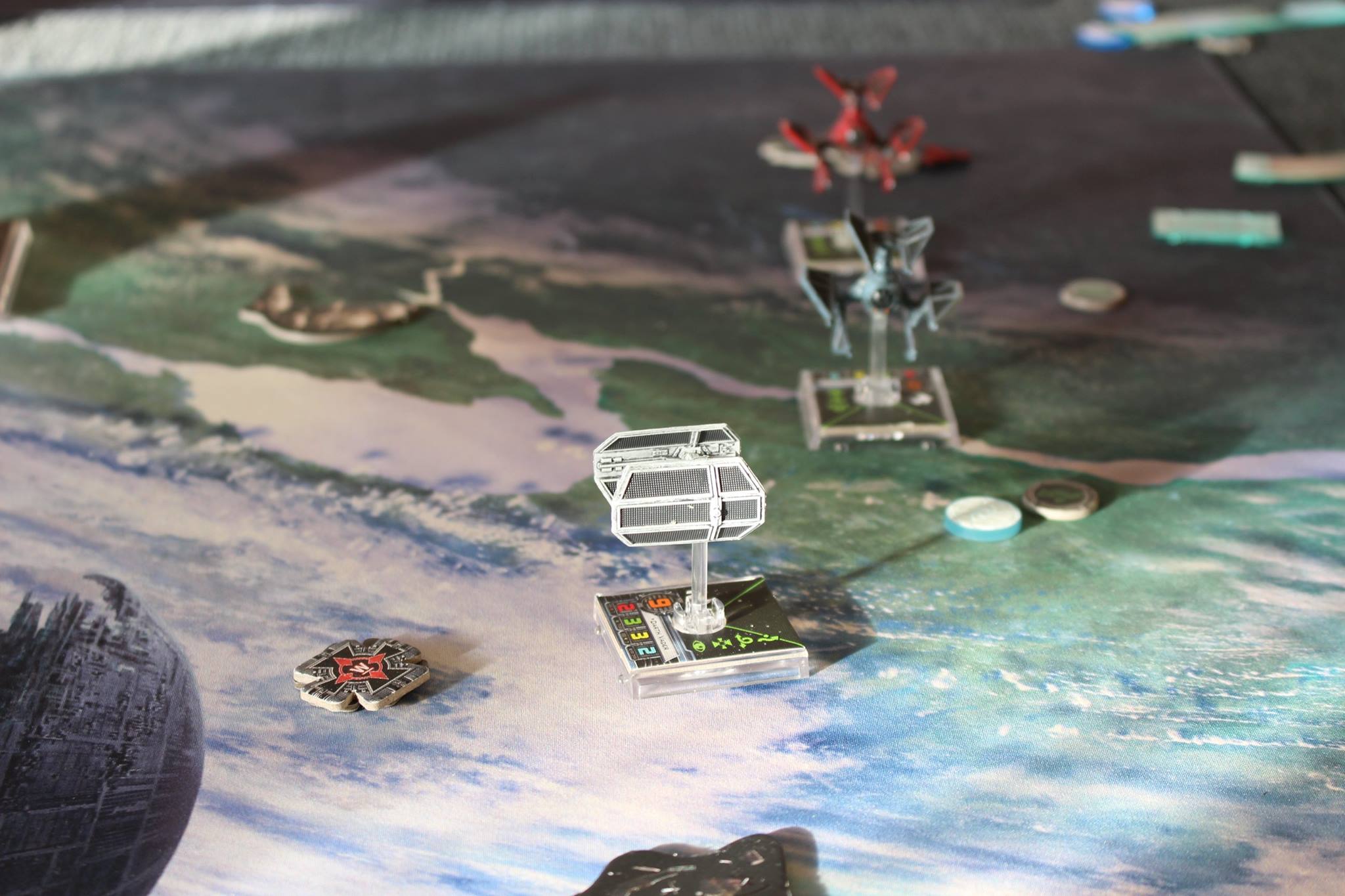 The X-Wing world was utterly rocked a couple weeks ago when Fantasy Flight Games announced a new FAQ for our beloved Star Wars Miniatures game. In this new FAQ, they made errata on four highly competitive upgrade cards: Manaroo, Zuckuss (crew), the TIE /x7  (Defender title) and his eminence himself, the Emperor Palpatine. You can see the announcement for the FAQ here:

Since this is a controversial topic, I’m going to tread lightly on these eggshells. Just kidding! I’m going to blast my opinion all over this post. Complete disclaimer, though, as a mostly mostly Rebel and Scum player I am currently taking a bubble bath in Imperial tears. Here we go!

Of these four changed upgrades, I’m going to say that the TIE /x7 title was the one that needed fixing the most. I’ve been saying from day one that FFG previewed this card that the free evade token for a negative two points was too much. Yes, the TIE Defender needed some help but something with it just didn’t sit well with me. Playing around 20 games against an /x7 Defender and a couple with one myself only reinforced my initial reaction. The TIE /x7 title in it’s original form was an example of power creep gone too far. Yes there is going to be power creep in X-Wing- it’s inevitable. However, the title went much too far. Stress didn’t do enough, nor did blocking. Honestly, I would have been okay with the title being changed to only allow for a few evade token if unstressed or if the Defender did not overlap another ship, but FFG gave it both stipulations and I couldn’t be happier. 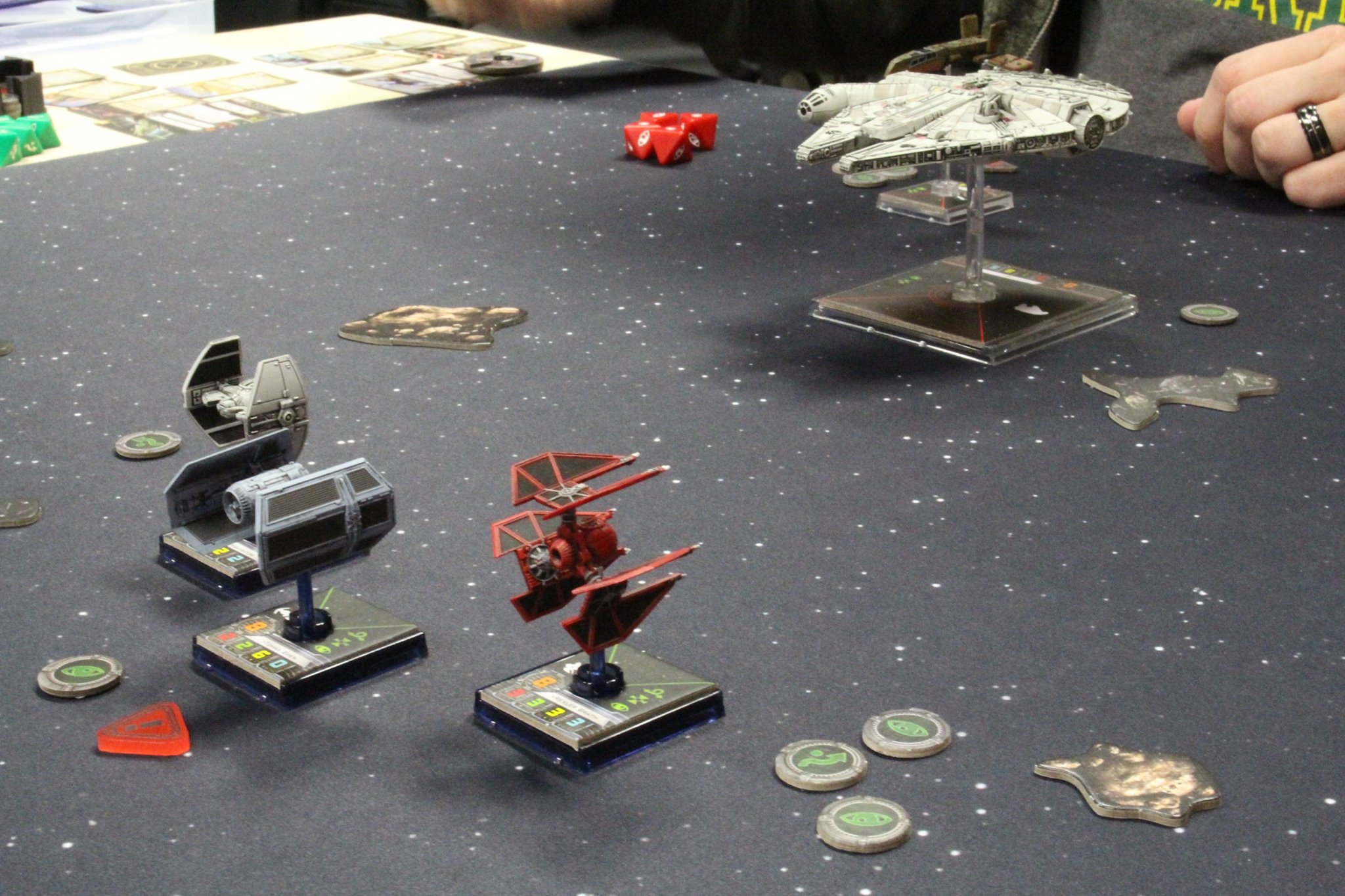 Next all talk about I’ll talk about the second least surprising change: Zuckuss crew. Personally, I think he could have been a point more and not too overpowered, but now he’s on a beautiful sweet spot. You can no longer use Zuckuss crew if you’re already stressed. His ability is still incredibly useful, but it has a downside, no matter what ship you’re running it on. Ships like Dengar from the now dead Dengaroo simply don’t care about stress and let’s face it, there’s always going to be ships that don’t care about stress, regardless of whether you murder Dengaroo by cutting his knees out from under him (more on that later). Zuckuss is still useful and totally worth one point. How about a Tandoshan Slaver with Zuckuss and an Inspiring Recruit, for example? You can still reroll two evades and get rid of them in one turn. I don’t think many people are complaining about this one. 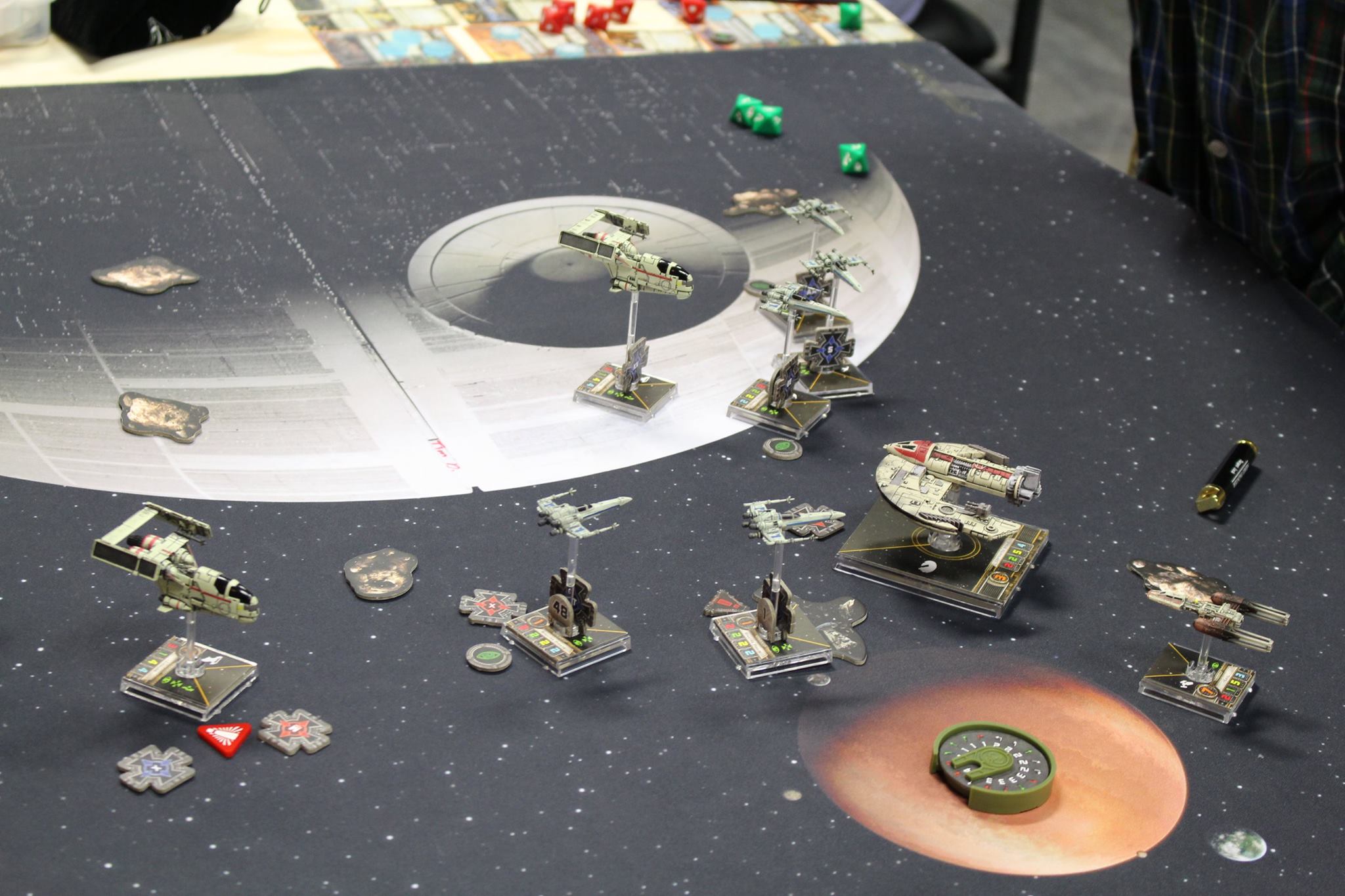 And now for the severed, bloody lower legs of Dengaroo I was just talking about. I think we can say with about 95% certainty Dengaroo is deader than dead. The whole strategy that made Dengaroo successful is that you could fly Manaroo around the board, boosting and rolling around and meanwhile, Dengar was almost untouchable. Now with the range one limitation, you will might have a couple range 3 shots on Manaroo. We might still see people try this list, but it won’t be winning worlds any time soon. The real question here is whether the recent and infamous Paratani will survive. I’ve never actually played against it, but my initial thoughts are that while it is definitely hurt by the change, is not enough to come even close to killing it. It’s all going to come down to what kind of engagement the Paratani player gets. Let’s say Manaroo is range one of a ship or two- she’s going to get a range one, three die shot on something, possibly with a focus. Meanwhile, Fenn is hopefully at range three with Autothrusters throwing three red dice himself and Asajj really doesn’t care where she’s at as long as she’s doing her thing and stressing someone. Manaroo takes a few damage and bugs out. The next round, she uses her ability to pass an extra focus token to Fenn or Asajj, making either of them more difficult to damage, and as long as Fenn’s Concord Dawn Protectorate title triggers he is an absolute beast. Yes, all these things have to happen but good players will make them happen. In terms of raw power level per point cost, it’s absurd that the amazing pre-erratta Manaroo costed only two points more compared to the already slightly undercosted Contacted Scout. Yes, range 1-2 probably would have kept her more competitively viable, but I think range one results in the most balance. 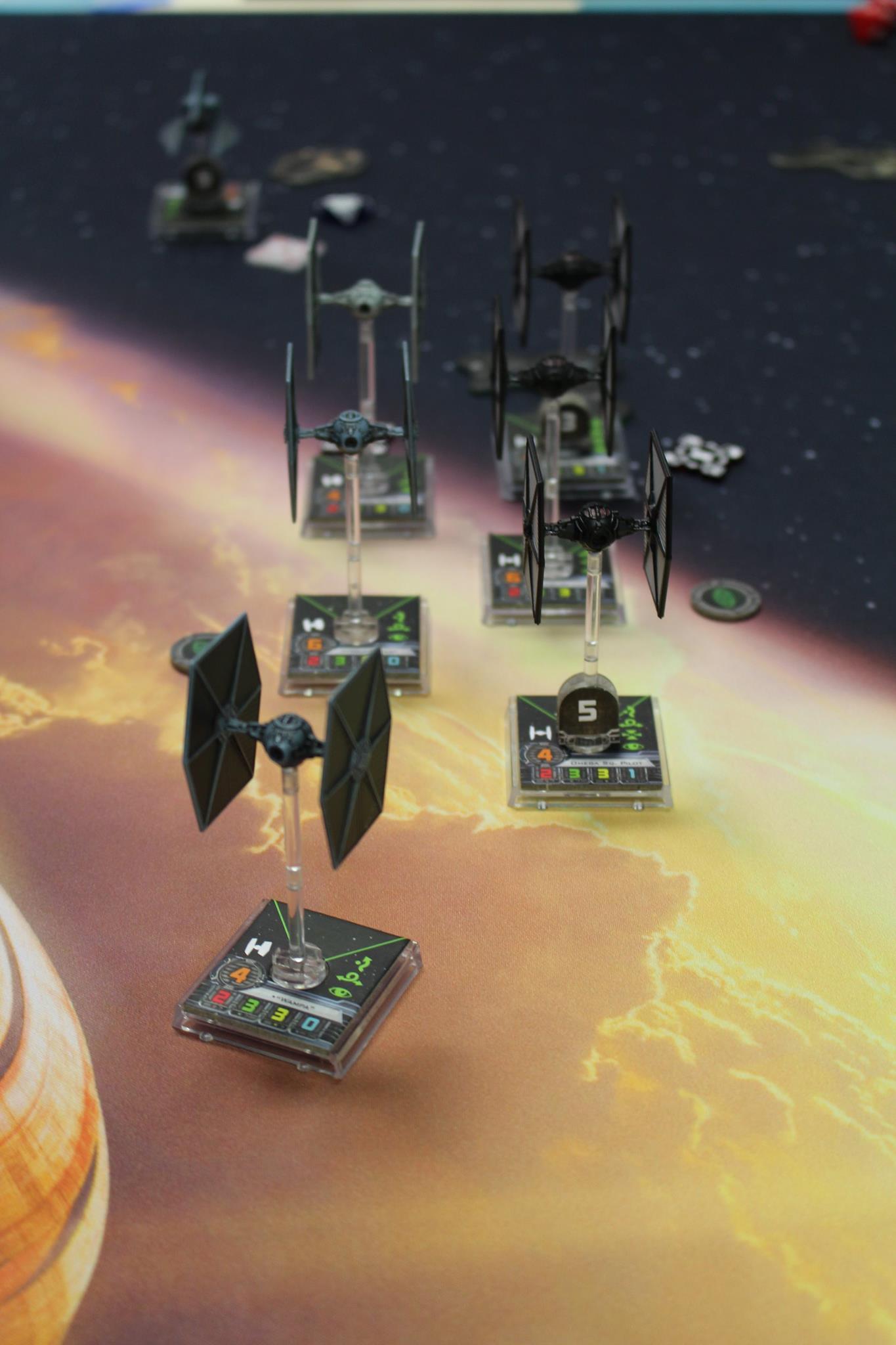 Finally, on to the most shocking change of all. Honestly, I did not see this one coming. From a Rebel perspective, I’ve hated Palpatine from day one. When he came out, Rebels just had few options to defectively deal with the unlimited power of what Palpatine could do to protect an Imperial Ace like Soontir Fel. I distinctively remember have my six ship Rebel list focusing all of its shots (which included a Twin Laser Turret​ double shot from my BTL-A4 Y-Wing) doing ZERO damage to a Soontir Fel at range three. Yes it’s super thematic that Soontir is dodging all those shots, but the reality is that this isn’t much fun unless you’re the one playing Soontir. Also, if you’re playing Soontir well, those ships shouldn’t have arc on you anyway! The fact that you could joust against that many ships and take no damage is absurd. However, as time went by and with the release of content like Feedback Array, the VCX-100 as a cheap platform for the Autoblaster Turret, Zuckuss crew, and my personal favorite R5-P8, Palpatine became less and less intimidating. So the question remains: was the Palpatine change too much? His ability now states that you have to declare, before you roll for a friendly ship, what result you will be changing a die to. Honestly, I was a little surprised they changed Palpatine over a year after he came out. Personally I think the /x7 change would have been enough to keep the meta diverse, but you won’t hear me complaining either.

So where do I think the meta game is going to end up? I hate to say this, but honestly I think we’ll be somewhere between Wave 4 (very distinct, divided archetypes) and Wave VII (TLT-heavy).  Twin Laser Turrets have the potential to do really well, but more than ever we have very strong jousters that, if flown well and estimate flight paths and ranges correctly, can completely dominate TLT heavy lists. Oh, and remember that thing called a TIE Swarm? Yeah it’ll probably be back. It won’t dominate and many people won’t try it, because only the really good players will know what to do with it, but it is definitely back. They simply couldn’t handle Defender-heavy lists before because blocking a Defender was just not effective enough, and once your Crack Shots ran out you had a really hard time killing a Defender flown by an experienced pilot. A-Wings with Crack Shot and Snap Shot? I hope so, but for now I think the staples will be strong: Regen, TLT’s, and yes, Imperial Aces. The Inquisitor, Whisper, maybe even Soontir Fel and Darth Vader will be back for quite some time. The verdict is still out as to whether Paratani will be dominant, but Attanni Mindlink is not leaving anytime soon. Personally, I’m excited to continue flying my Attanni Aces Build that I have had some success with recently, but I will show that off in a post soon.

Here’s how I’ve played it so far:

The beauty of this squad is that you could build it a number of ways. You could drop Sabine on Jan, the bombs on both her and Miranda and add a Twin Laser Turret and Chewbacca crew on Miranda, while opting for Long Range Scanners on Miranda so that you don’t need to bank focus tokens before you engage in combat. Personally, I prefer slow-playing and banking focus with Ray, but I could see the merit of having the additional regen of Crewbacca.

Additionally, the 20 point Green Squadron pilot is the best ship I could find in that point range, but depending on how you build out Miranda/Jan, you could find room for something like Biggs, or a TLT Y-Wing- both good options.

Anything that relies on an evade token is going to just melt at the power of a 6-die homing missile. That’s one of the last things Soontir Fell wants to see across the table. Try the list- it’s a lot of fun when it works as it’s supposed to and depending on your meta you can change it up to work for you.