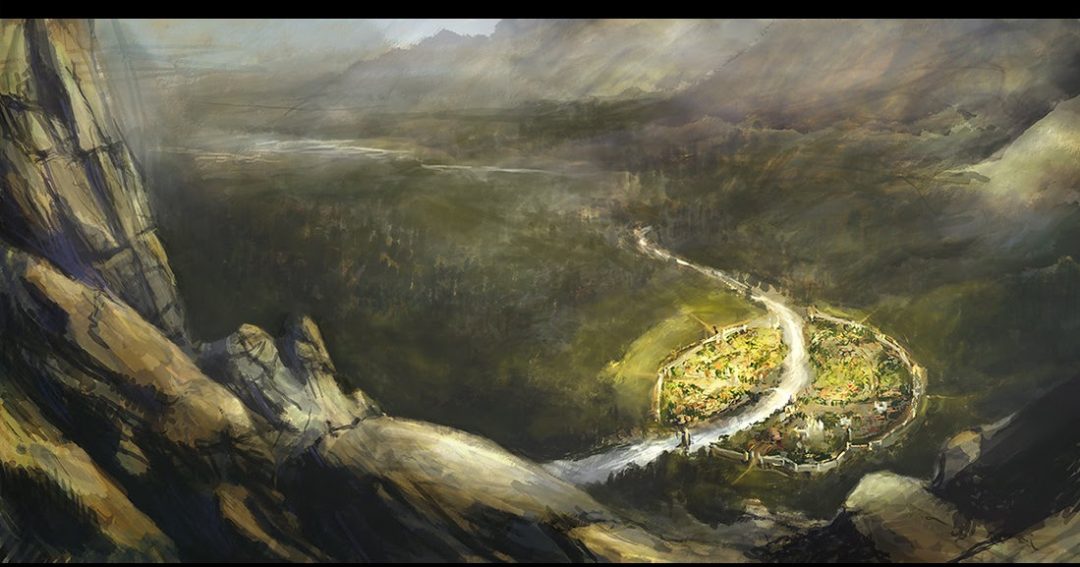 A bit of a backlog update, these are the adventures that took place on March 2nd, 2019 at The Village Geek in McPherson, Kansas (Silverymoon Chapter)

Tel rounded up a group of adventures together and sent them out on a mission to see what’s happening in Sundabar a town to the east of Silvermoon. Their main economy being from multiple mines and all they had a odd request to just come and help them rid a group of bandits. Human rogue- Jaquen, Human Bard- Zora, Human Paladin- James, Tiefling Paladin- Dee Livvy, & Dragonborn Figther- Red set out on the mornning and had no issues. As night fell they saw a black cloaked rider moving at top speed towards their direction they where heading. As the night went on they didn’t find or have any other surprises but 1 shadow man.

As the group went forward down the road around midday they realized the shadow was following and made a stop to try to find out the shadows intent. After a few attacks and some crazy yelling from Dee Livvy they finally figured out it was more an illusion casted on them to divert their attention from other things while making them invis to the world. They then reached the town where they found a pretty run down town. There for sure has been better days around this town. The locals didn’t really have the happy go lucky emotions flying but they weren’t sad and in despair. After meeting with the mayor and finding out how might be the person behind the shadow with no hard proof other than heresay. They made logging for the night.

After gathering information about the location, how people where treated and other fun and exciting facts (more or less about the drakes running round). Red got the idea to use her rogue ally to steal some pure ethanol from the inn keeper that had some great powers of putting people who drink it under, but the ideal use turned it into a weapon under reds thinking (would later be used a Molotov). After information gathering and stealing they made their way to the mine to find it empty of people and most belongings except the onsite armory where they found a unusual pair of googles of night. They where preparing for a heavy fight with the drakes when a unnamed monster came to sight range but not falling for threats beckoned them into the mines farther for some entertainment.

They took the request moving into the mines in a combat file only to be greeted by no body. The main work area had been left void of anyone. There was a few passages off from this chamber and the party was cautious about moving forward. They made some really loud sounds trying to get the attention of any thing but nothing moved in on the party. They slowly rounded a corner to the second mining chamber where they found a small ore crate baracade in place with a few men behind it. They got one free round off from the cover before Red charged in and forced a battle of wits to utter defeat for the 3 half-dragon men behind there. They where slaughter and 1 did manage to get to the next area but meet his fate before long from a few deep wounds. The drakes looming threat keep the party from running after him and they slowly filed through a break in a grand craved wall in the side of the mine. As the party entered the next chamber they where meet with a HUGE chamber with a temple like structure in the middle. As the party examined the 7 pillars that was in front of a set of doors they found ancient cravings from the times of the Tear Fall and the world sundering.

After this chamber they slowly moved forward still watching for the drakes and any more hiding enemies. They had knowledge of 4 human sized men, 2 drakes, and one large half-dragon that looked more dragon than man. The next chamber was a medium room with another set of 7 pillars showing more of the same tell of AO, Asgorath, and the primordials. After getting through a huge set of doors that a large orc would only half fill they found a odd chamber lite with blue fire braziers around 6 pillars telling more of the story. They dropped a few items onto the floor only to watch them disappear. After the horror of a pervious mission they slowly tested and used the dragonborn Red to carry people over the new found “trap”. James how ever tested it with his own life on the line only to find the room was a self clean room for the reason of keeping the next chamber free of such dirt.

They entered the next chamber to find a GRAND chamber in honor of the 7 Dragon kings of old and the world tree. There stood a stone engraved with a message about the history there amoung the grand statues of said kings. The party after entering a small ways saw the Half-Dragon standing on the raised platform. He turned and said a few words while saying his name- Daryun. As he honored a verbal threat from Red, his true size and figure was now fully visible as he approached. Daryun standing roughly 14’8″ tall was a platinum half-dragon armored with what looked like a mix of Dragon Scale and Plate mail, showing a symbol of Tiamat, with a large battle-ax/hammer, and a shield. He then fought the party nearly downing a few of them with a few blows was then bought down to a knee. After that he revealed his true power by what looked like he brushed all the damage he took off and using a ring he teleported away. After he left they went to the town and had them reorganize the mine and headed back to Silvermoon. The monster known has Daryun waits for the next engagement.

3/2/19. This week members of the guild were called to the outlying town of Triboar along with guildmaster Tsiya, the Lord Protector of Triboar, one Darathra Shendrel, they were called upon to discuss the possibility of maybe working with Triboar on future endeavors. This particular case was handed to us in Silverymoon by our counterparts in Neverwinter as the guildhall there was backed up on requests. In order to demonstrate the capabilities of our guild’s agents, Tsiya took Malik Morningstar, Momond, Freyja, Vargach, and Ater all off of the Dread Wolf case, he’d been inactive for a few weeks so it looked like we had the people to spare. The presence of a pair of Dragonborn, a Lizardfolk, and a Tiefling did not escape local notice when they arrived. For once our people made good time while traveling and arrived a whole day ahead of schedule.

On arrival our people found the town of Triboar was creating a set of makeshift barricades around the local keep. It looked as though they had activated their local militia. Our agents attempted to establish contact with the Lord Protector, but her aide informed them that she was in a meeting. Some of our people intended to push their way into the meeting, which of course got the militia a little bristly, fortunately our people managed to defuse the situation before they were run out of town. I have to state that I question Tsiya’s judgment bringing demonspawn and man-eaters on a meet and greet. From there most of our people congregated at the Talking Troll, if they were trying to display the courage we instill in our people, ordering drinks from the tavern where tables are covered in bird-droppings is a good way, I suggest we outfit some of these people with magics meant to counter-act diseases in the future if this is how foolish they’re going to be. The owner of the partially burned out tavern did help our people in gathering information, for starters he told confirmed to our agents that most of the town was having trouble sleeping, which our people already suspected as most of the town was sluggish, irritable, and looked exhausted. I’m also given to understand that he roped one of our agents into “investing” in helping him renovate the place, in the EXTREMELY unlikely event that any money is delivered from the Talking Troll to the guildhall, see to it that it is redirected to Momond.

The next day our people were recalled to the local keep to officially meet Lord Protector Shendrel. During the meeting it became clear that the Lord Protector had been in contact with the Dread Wolf, and in fact the Dread Wolf was still in town, when the guildmaster attempted to arrest him however the local militia drew their weapons and another tense standoff started. It seems to me that in order to relieve the tensions in the room the Dread Wolf may have unmasked themselves, though all of our people claim they can’t remember exactly what they saw beneath his mask. Guildmaster Tsiya’s account does not entirely line up with the other operatives, if the watch ever learns of this it will not look good for the Dearborn Company. Our people also state that after the local problems were handled there was a verbal agreement that the Dread Wolf would return with our people to await trial.

Evidently the Dread Wolf suspected that the town’s trouble sleeping, along with a few local incidents were connected to the presence of a Night Hag. Over the course of the next few days our people helped to prepare the area for the inevitable encounter with the hag. At sundown on the third night they learned that their troubles were slightly more compounded as an entire coven of Night Hags were present. Our people handled themselves valiantly against creatures they called “feeders”, while Tsiya and the Dread Wolf handled the threat of the Coven of hags. According to the guildmaster, at this point the Dread Wolf broke their bargain and skipped town before they could be apprehended.

Come join us every other Saturday for an open Dungeons & Dragons campaign at The Village Geek in McPherson!

More info can be found here