01.19.2019 — Members of the Dearborn Company answered a call for help from the Church of Kelemvor. The burial grounds known as Ebon Downs we’re the source of horrors that over ran the village of Grimhallow many years ago. The dead rose and wreaked havoc. Few villagers survived. Today Grimhallow is a shadow of the village it once was. But, people still scratch a living from the earth and an inn on the outskirts of the village does a brisk business with those traveling the route from Silverymoon to Yartar.
Evil is again showing itself. The dead are stirring. A lone Doomguide of the Church of Kelemvor and a small cadre of priests are all that stand between the risen dead and land of the living. The Church’s resources have been stretched thin. Those standing vigil over Ebon Down were ill prepared and three priests went missing in the main crypt. Six stalwart adventurers heard the call and went forth to aid the church. Koss the Elvin cleric, Aram the human cleric, Daniel the fighter, Zargabaath the human paladin and a nameless Elvin ranger arrived in Ebon Downs and met with Doomguide Soulhearth. After learning of magical seals and braziers that shine with the light of Kelemvor, the party entered the crypt.
The adventurers proved their mettle, battling the undead found massing in the crypt. Bards will sing of their strong sword arms and dangerous magics, along with sharp minds for strategy, that allowed them to prevail. The stories will omit the repeated fumbles, dropped weapons and armor covered in vomit.
The party returned the broken seals to Father Soulhearth for repair and cleansed the crypt of the walking dead.

01.19.2019 — Adventurer’s from the Dearborn Company — the archer Lylic, Tiefling sorcerer Malik Mourningstar, and paladin of Tyr “Warden,” as well as new recruits Aasimar, an elf bard, Ater Navonod, a dragonborn bard, and Rolen Galinndon, a half-elf wizard — were assigned to venture to the tomb of Radomir van Drogbar at the Great Tor in the Evermoors, to recover a weighty tome at the request of an apprentice of an apprentice of an apprentice, etc., of his by the name of Gillespie.
En route to the tomb, the party was ambushed by a pack of wolves. Only the wizard Rolen realized what was happening before the wolves dashed in, but the adventurers were able to slay or drive off all of the wolves. Upon locating Radomir van Drogbar’s tomb, the paladin “Warden” used his divine sense to detect undead within. Inside, they battled skeletal guardians and an immaterial shadow monster. The party recovered van Drogbar’s tome, which was bound with a lock, and “Warden” liberated a magical shield from the tomb.
Upon returning to Silverymoon, the party learned van Drogbar was the most famous chef in all of Luruar, and the tome was his cookbook. Gillespie had hired the Dearborn Company to recover it so he could settle a dispute over the ingredients in pastry dough.

01.19.2019 — After receiving a missive for a job, Company members Gigget the Fake (Gnome Ranger), Thrash the Half Orc Monk, Zora the human Bard, Bulgol the dwarven cleric, and newest member Deliverance-of-joy-to-the-people ‘D’Livvy’ the Tiefling paladin were assigned to go and check on the enchanter Helgaba. They arrived at the house and with a little inspection realized the house has stood empty for at least a week. Bulgol, Gigget and Thrash learned the hard way to not help them selves to the house’s goods when a broom started beating them up while they attempted to make a sandwich and steal cereal. They learned from their actions quickly after coming back to consciousness and while they explored, their fingers were noticeably nonsticky. They followed the path up to Helgaba’s upstairs and discovered her workshop. They stumbled upon two imps trying to escape and beat up one but the other escaped. A little more searching, they found the home owner trapped in a pocket dimension mirror and with a little insight were able to get her free. Helgaba thanked them for their help and isn’t even mad about the broken window that Thrash jumped through. 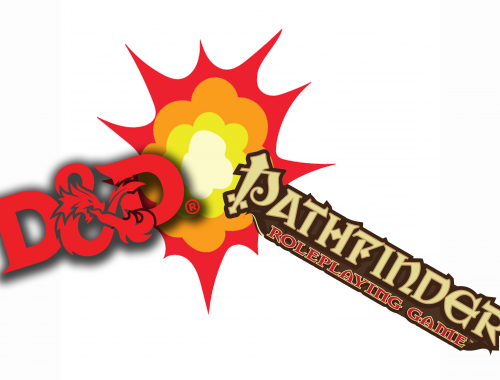