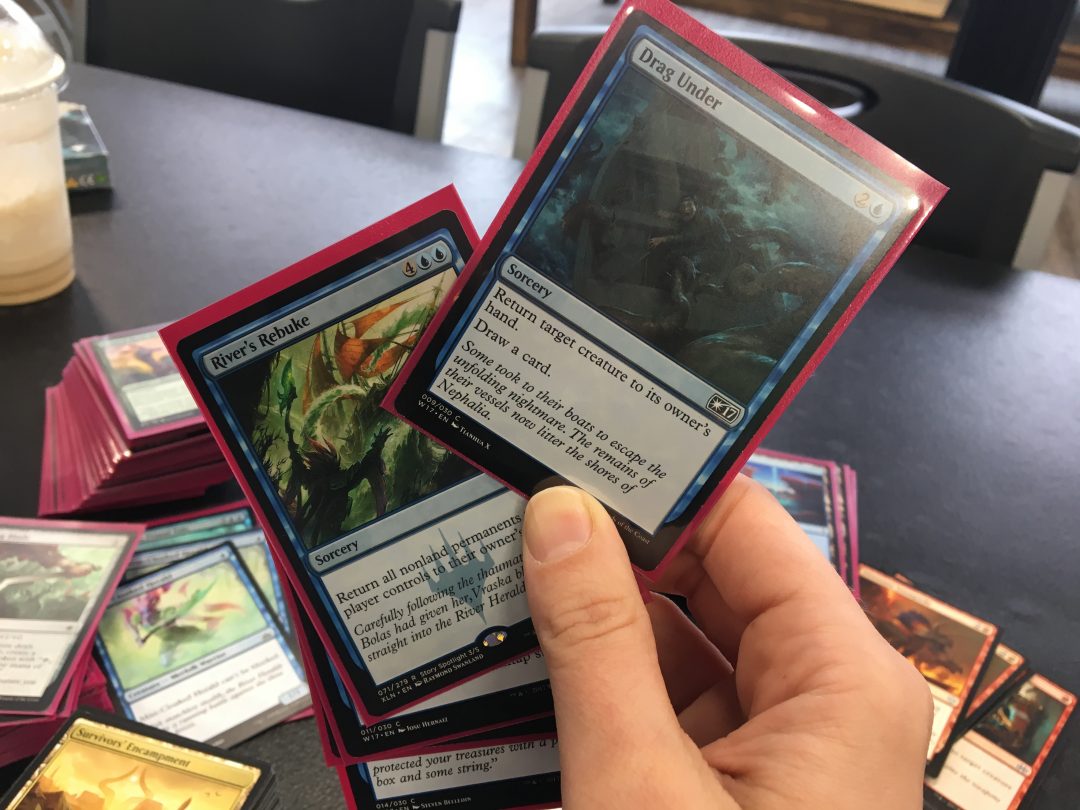 Five things I’ve learned in my first month of Magic

Prior to becoming a member of The Village Geek family I had never played Magic: the Gathering before. Of course I had heard of it and seen it played but it had always only been on the periphery of my nerd-dar. However, after playing through two hands with my blue-white demo deck I became absolutely smitten and now, just barely a month after learning, I can happily say that I am on my way to becoming a baby Planeswalker.

I am a very reason and order based person (despite being a Gryffindor). I like systems and no loose ends and MTG delivers on all of those fronts in an almost algebraic fashion: mana is spent, spells are cast, damage is dealt, and although some turns can become very complicated there is always resolution. It’s an ideal love story for people (like me) who love unraveling the mysteries of how and why systems work.

My affection for the game has not come without some level of frustration and a lot of getting my teeth kicked in by my coworkers and fellow Village Geeks. However, nothing teaches you faster and more completely than losing. Here are the five most important lessons I’ve learned since I started playing Magic: 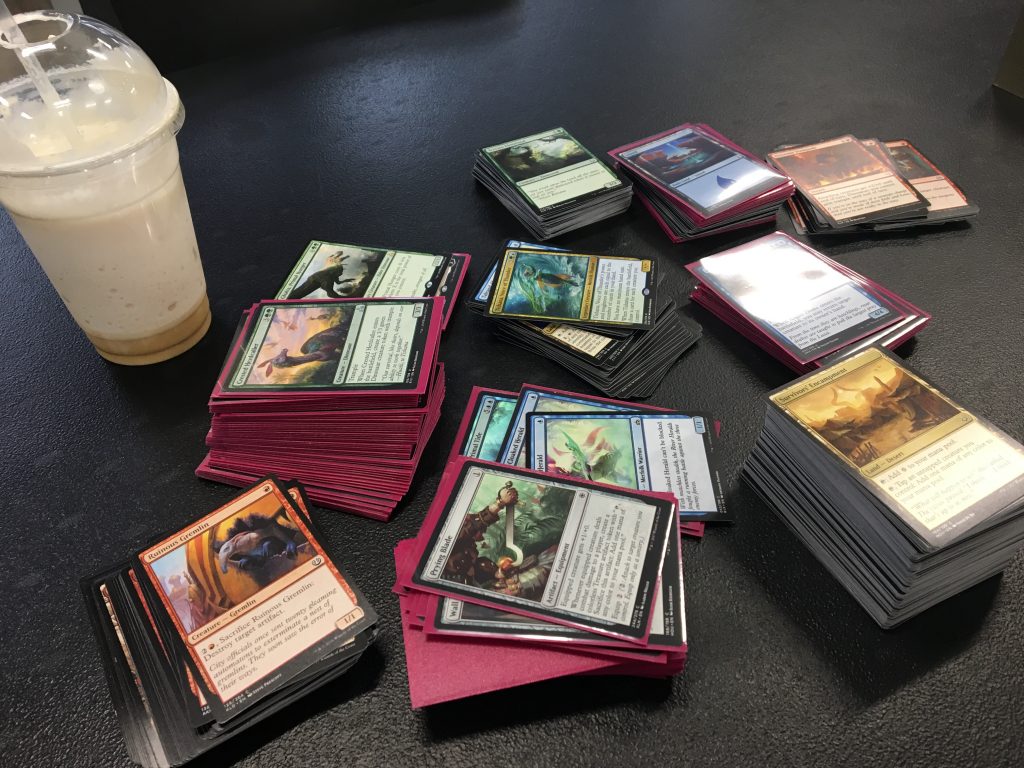 At my first Friday Night Magic I tried to play with a deck so large I’m embarrassed to even admit the number of cards I was playing with. Not only did I look silly trying to shuffle all of those cards, but I looked even more like an idiot by being completely unable to cast any effective spells because I couldn’t get the right combination of land/creatures/instants to make any moves. Silly me thought “Look at all these neat cards. I like them all. They are so pretty and do such cool things. I don’t want anyone to feel left out!” Because all of my cards have feelings and personalities, (duh), I was afraid of leaving anything out, but now I know that what’s worse than leaving a cool card out of my deck is having that card in your hand but being completely unable to cast it. Now I’m learning the joy of creating multiple decks that include cards that compliment each other and have specific tactics.

2. Mana curve is a real thing.

If you thought I was being too poetic about how much I’m in love with the mechanics of gameplay you’re going to be really annoyed by how much I enjoy calculating mana curve and cost distribution of cards in my deck. Once I learned that 60 cards is not just the minimum but should be pretty close to your goal maximum I had to learn how to build the deck with the appropriate associations of mana and spells. There’s also no point having a card that costs 8 mana to play if you can never draw and play enough land. This article was very helpful: https://magic.wizards.com/en/articles/archive/beyond-basics/how-build-mana-curve-2017-05-18

You have to layout all of the cards you want to play and have an idea of how and when you want to be able to attack. Which brings me to number three:

There are as many different ways to play Magic as there are players. Do you like crazy beasts or punching through everything or powering up a tribe or being able to control your opponent? I learned pretty quickly that I am definitely a control player. Give me more life, put my opponent’s creatures to sleep, stop the creatures from being able to attack, get rid of their lands, let me draw more cards. Which isn’t to say that I don’t also enjoy smashing stuff with dinosaurs or having a small army of mermaids, I just definitely know that I will always be the most excited by instants and enchantments that tangle up my opponent rather than brute-forcing depletion of their life points. Once you know what kind of player you are, you can build a deck that suits it and then distribute the cards and lands as necessary. 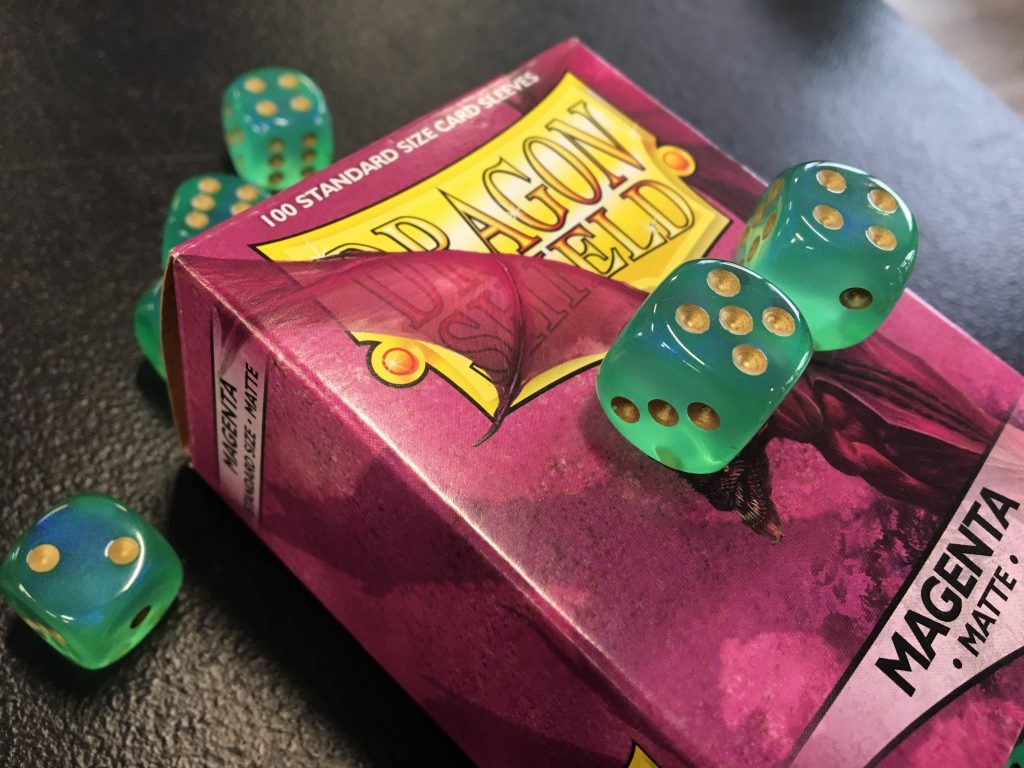 Get card sleeves: in one game I had to mulligan three times because I wasn’t able to properly shuffle my cards. Sleeves make it sooooooooooo much easier and some of them are pretty and they protect your cards. Also, have some way of adding counters. Don’t make it harder on yourself than you have to. Even if it’s just random ephemera (like paperclips or beads or pencaps) have some way of keeping track of everything you’ve cast and any additional counters it has.

5. People are nice. The game is fun. Ask your questions.

I have yet to play someone who wouldn’t answer my questions. I’ve learned a lot by playing more experienced players who have curated really wonderful decks. Sure, those decks murdered mine, but I have always found that you learn infinitely more by losing than you do by winning. Magic has been around for decades. Take advantage of the millions of resources available online or from people who have more experience than you. GATHERING is half the name of the game and the community of players is definitely at least half of the experience. As much as I’m enjoying casting spells and planning decks and finding cards I want to play with, I am equally enjoying the people I’ve met and learning about their experience with Magic and what they like about the game.

Oh, and bonus #6 + #7: make sound effects when you cast spells and always let your opponent know when your turn is over.