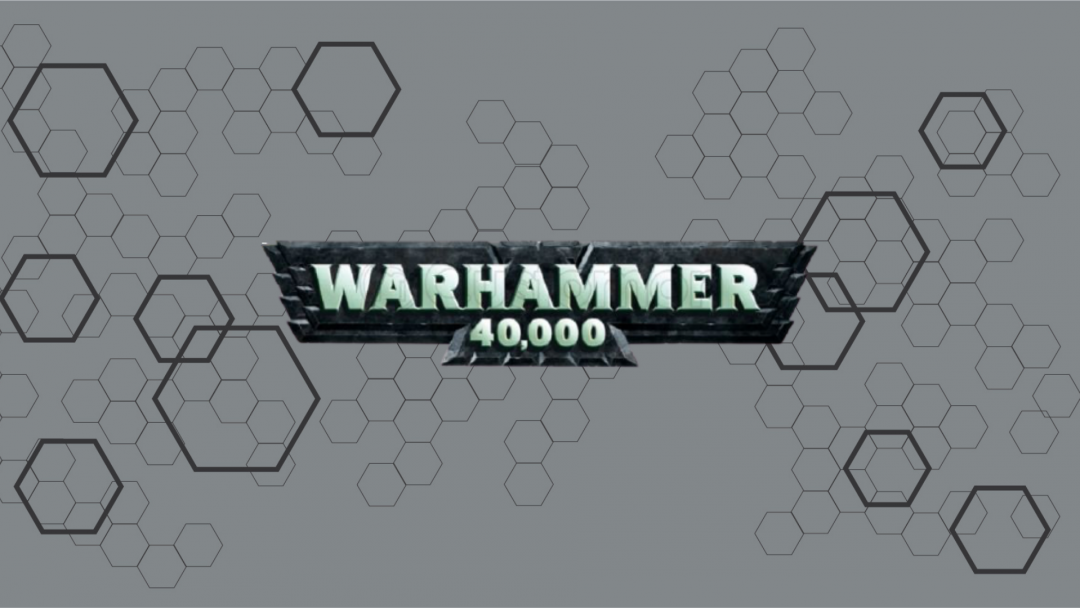 The Village Geek adds Warhammer 40,000 to its gaming community

For years, the Village Geek has helped our gaming community travel to the galaxy far, far away of Star Wars, walk the many planes of Magic: The Gathering, and explore the Forgotten Realms of Dungeons & Dragons. And now the Village Geek has transported us to the battlefields of the 41st Millennium with Warhammer 40,000!

Warhammer 40,000, or 40K for short, is a miniature wargame in which players collect, build, and paint science-fantasy armies to fight epic battles for the fate of the galaxy in the distant future. It is produced by Games Workshop and is the most popular miniature wargame in the world, based on sales data reported to ICv2.

The three main elements of 40K are the lore, the hobby, and the game itself, and today we will explore the basics of each.

“In the grim darkness of the far future, there is only war.”

Warhammer 40,000 is set in our own Milky Way galaxy nearly 39,000 years in the future – 10,000 years after humanity’s establishment of a galaxy-spanning empire and the civil war that nearly toppled it.

To talk about the lore of 40K, we have to start by talking about the Emperor. The Emperor is an immortal human psychic, born on Earth 10,000 years before our own time, and for 38,000 years he sought to guide humanity and protect it from the Chaos gods. He witnessed the rise of humanity’s first galaxy-spanning civilization beginning in the 15th Millennium, and its collapse at the beginning of the Age of Strife in the 25th Millennium.

In the late 30th Millennium, the Emperor conquered the many warring factions on Earth (now known as Terra) in the Unification Wars and formed a treaty with the technology-driven Adeptus Mechanicus of Mars. He then turned his attention to reuniting Terra with humanity’s many lost colonies. To aid in this, he created 20 superhuman sons from his own genetic material; these are the Primarchs. Fearful of what the Emperor could accomplish with the Primarchs at his side, the Chaos gods scattered the infant Primarchs throughout the galaxy. With the Primarchs taken from him, the Emperor instead genetically augmented human soldiers to reflect the Primarchs, creating the first Space Marines.

Some human worlds welcomed the arrival of the Emperor, but many others had to be conquered by force. Together, those wars of conquest are known as the Great Crusade. During the Great Crusade, the Emperor was reunited with the Primarchs, each having grown into a great leader and warrior in their own right. In one such reunion, the Emperor in disguise challenged Vulkan to a series of contests, with the loser swearing his allegiance to the victor. The challenge came down to one final contest, a great hunt. Vulkan slew a great fire-breathing beast on the slopes of a volcano, but the volcano erupted as he returned with his kill. Vulkan was nearly thrown off a cliff, holding on with one hand while he held his prey with his other hand. Then the Emperor appeared; he had slain an even larger beast than Vulkan, but the Emperor threw its carcass into a lava flow to save Vulkan. Vulkan was declared the victor, because he returned with his prey, but he refused his prize and instead knelt before the Emperor himself, stating that anyone who valued the life of another over his own pride was worthy of his service. It was only then that the Emperor revealed his true identity as Vulkan’s father and installed him as the commander of the Salamanders Space Marines.

After the Emperor was reunited with all of the Primarchs and the Great Crusade neared completion, the newly founded Imperium of Man was rocked by civil war. The Chaos Gods had corrupted Horus Lupercal, Primarch of the Sons of Horus Space Marines and Warmaster of the Imperium. Horus turned half of the Primarchs and their legions of Space Marines against the Emperor, and civil war raged across the galaxy in what is known as the Horus Heresy. The traitors fought all the way to the Emperor’s palace on Terra. In that climactic battle, the Emperor cut down Horus, but the Emperor himself was mortally wounded in their duel. The life support systems of the Emperor’s Golden Throne have kept him alive, but motionless and unconscious, for the past 10,000 years.
In those 10,000 years, the Imperium of Man has warped into something that would be unrecognizable to its own Emperor. The Emperor sought a prosperous future for humanity through science and rationality, but the Imperium has turned into an oppressive, superstitious society dominated by a religion worshipping him as the God Emperor of Mankind. Technology has regressed as knowledge of existing technology is lost, and innovation is taboo.

What’s more, the death of Horus didn’t end the threat of Chaos or lead to the final defeat of the traitors. Instead, the traitorous Chaos Space Marines and their allies retreated to the Eye of Terror, a massive tear in the fabric of space where the Warp, a dimension of thought and emotion that is home of the powers of Chaos, overlaps with reality. The forces of Chaos continue to prey on the Imperium from their sanctuaries within the Eye of Terror.
In addition, all manner of alien enemies threaten humanity from all corners. There are the Eldar, or Aeldari as they call themselves, technologically and psychically powerful aliens who dominated the galaxy for millions of years before their dramatic fall shortly before the Great Crusade. There are the Necrons, skeletal androids who are even more ancient than the Eldar and who are now reawakening after millions of years in stasis. There are the Orks, brutal warlike aliens whose ramshackle technology works because they believe it does. There are the T’au, a young race of caste-based expansionists whose technology is growing by leaps and bounds. And there are the Tyranids, devouring insectile monstrosities guided by a shared hive mind.

All is not lost, though. Humanity has many defenders across the galaxy. Those include the superhuman Space Marines, the pious warrior-women of the Adepta Sororitas, the countless soldiers of the Astra Militarum, the cybernetically enhanced warriors of the Adeptus Mechanicus, and the immense mechs of the Imperial Knights, among others fighting to preserve the Imperium of Man.Which side will you fight for? Will you defend humanity against the horrors of the galaxy, will you champion the Chaos Gods, or will you command alien forces intent on conquering the galaxy? Whichever path you take, 40K offers models to build your army in the hobby side of the game.

Models for 40K come unassembled and unpainted, leaving it up to the players to get them ready for the battlefield and looking their best. Building and painting models is a major part of 40K, and is commonly called the hobby side of 40K. Many fans of 40K spend more time on the hobby than the game, and tournaments often have awards for the hobby recognizing the best-painted armies or individual models.

Building and painting models is an excellent way to customize your army and make it uniquely yours. Alternatively, players who especially love an official, canonical army can build and paint their models to match. And of course, every 40K warlord knows the dice spirits favor painted armies.
With just a couple of tools and some glue, models can be easily built right out of the box, but kitbashing and converting models also are options. Kitbashing refers to building a model or group of models using parts from multiple kits, either for aesthetics or to give them alternative weapons. And converting is the next step beyond kitbashing, modifying one model to represent something else entirely.

Likewise, painting can be as basic or involved as you want it to be. At one extreme, you don’t have to paint your models to play 40K, although some tournaments or leagues may require armies be painted to a certain standard, and the latest round of competitive rules award a player 10 points (out of a possible total of 100) for having their full army painted up to a “battle ready” standard, also known as tabletop standard. A model is “battle ready” if its colors are blocked in, a darker shade has been painted into the dark recesses, and its base has been given a basic scenic paint job – it is a very achievable standard, and there are several ways to accomplish it. Players can go beyond battle-ready models, adding highlights, fine details, and other finishing touches to achieve a “parade ready” or display standard.

We will go into more detail about painting in a future article.

Once your army is ready, it’s time to lead your troops into battle!
Games of 40K can be played in different formats and at different scales, but it always boils down to a battle between two or more armies. Often, but not always, those armies will be fighting to secure strategic objectives, not just to wipe each other out.

The overall rules for 40K can be found in the “Core Book,” and each army has a book called a “codex” with the stats and rules for the models that can be included in that army. Games Workshop launched the ninth edition of 40K this summer with the core rules. And they are beginning to release new army codexes, starting with Space Marines and Necrons on Oct. 10. For other armies, players can use their eighth edition codexes until they receive ninth edition updates.

In addition to the rules and models, the only things you need to get started with a game are a tape measure marked in inches and a bunch of six-sided dice. The tape measure is to measure the distance that models can move and the ranges that they can attack at, and the dice are used to determine the success of attacks and other actions with an element of chance. The game is structured with one player taking a turn with their entire army, followed by the other player taking a turn with their entire army, alternating for a set number of rounds, typically five.

There are three main formats of 40K: open play, matched play, and narrative play. Open play is the most freeform format, with players bringing whatever models they want to use, with no faction restrictions and very loose rules; many players start with open play to get a feel for the basics of the rules. In contrast, matched play is very rigid and is used for competitive games and tournaments. In matched play, army composition must meet certain rules, and every model and piece of equipment has an assigned point cost; an army’s total point cost must be at or below a set threshold. Narrative play combines competitive elements and storytelling and often is built around an ongoing campaign where armies can gain experience and suffer casualties that carry over from one game to another.

That’s all for now, but in our next look at 40K, we’ll talk about what to take into consideration when choosing your army.

Until then, remember, there is no peace amongst the stars. 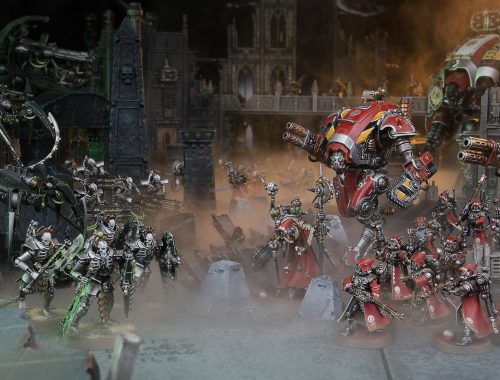 How to Choose a Faction for Warhammer 40,000