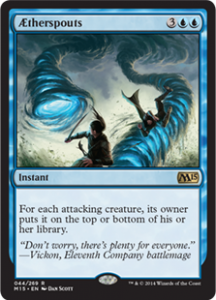 Now it’s my turn in this series we are doing. Aetherspouts is hands down my pet card in the Commander format. This is the card that I always catches my opponents off guard. It’s a psuedo board wipe that can cripple an opponent in ways they may never recover from before the game ends. I know the staple blue board wipe is Cyclonic Rift but I personally prefer Aetherspouts. I like my commander games to go long but not forever. Cyclonic Rift too often “restarts” the game and I would rather wipe the board of my opponent’s creatures and keep mine as well as any other non-land permanents in play. Keeping non-land, non-creature permanents in play will keep the game moving forward.

Aetherspouts has also never made anyone as angry as I have seen a Cyclonic Rift make players angry. I don’t like playing commander to make people angry. I like to play games in ways that can make everyone have an enjoyable time and Aetherspouts accomplishes that better than Cyclonic Rift.